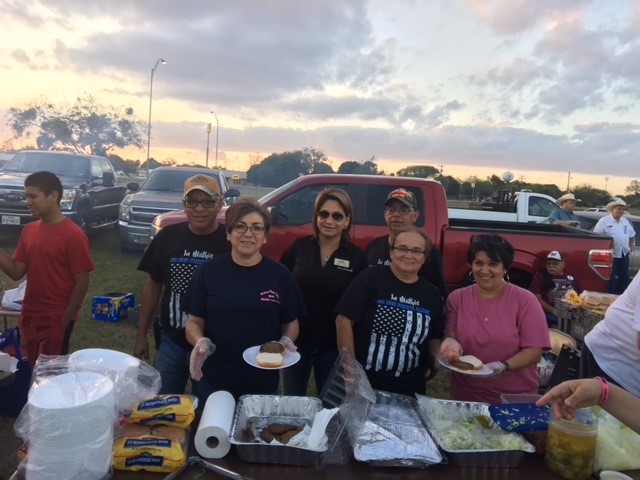 When the Mathis Police Department of southern Texas invited Rolando Barrientez to their National Night Out event last Friday, Aftermath’s Senior Manager of Law Enforcement Realtions leapt at the opportunity. Mathis is a city of about 5,000 people, located 30 miles north of Corpus Christi. This year’s NNO event was spearheaded by Mathis PD’s crime victims advocate and administrative assistant, Isabel Rivera, who put out the call to other local groups and organizations to get involved.

On a balmy October Friday, the city of Mathis turned for free food and fun, as well as the chance to learn more about their neighbors and municipal services.Following the devastation of Hurrican Harvey in September, the event was a positive way to demonstrate that the community spirit remains strong

What is National Night Out?

National Night Out, or NNO, is an awareness-raising community event focused on bringing together police and the local communities. It is held the first Tuesday of August, though Texas holds their events on the first Tuesday in October to avoid the hot southern temperatures. This year, Mathis waited until the weekend for their event, knowing that it would allow for an even larger turnout. As Rolando explains, they were not wrong!

NNO is sponsored by the National Association of Town Watch in the United States and Canada and has been held nationwide since 1984. National Night Out began simply with neighbors turning on their porch lights and sitting in front of their homes. The first National Night Out involved 2.5 million residents in 23 states; today, it has grown to include more than 38 million residents in thousands of communities in all 50 states, as of 2016.

Mathis kicked off their NNO celebration with the VFW and American Legion presenting of the colors of the American and Texas flag; everyone joined in reciting the pledge and singing the National Anthem. The local high school marching band performed and there were also Halloween-themed games, mostly directed at younger children. Kids could play corn hole and ring toss and even musical chairs; winners won cookies and other baked goods.

Rolando brought free hand sanitizer and pens to give away. “I was able to meet members of the community who never heard of Aftermath Services or any biohazard companies for that matter,” he said. “People were glad to hear we are able to be of service when families experience traumatic situations.”

Fun Was the first law of the day when it came to local first responders. The Mathis Volunteer Fire Department visited to speak to the community on the subject of fire safety. They also brought in a vehicle and demonstrated the famous “jaws of life,” used during emergency extrications. Mathis EMS gave tours of one of the company ambulances and educated the public on emergency medical services. San Patricio County Sheriff and Mathis Police Department were also well represented.

As a unique attraction, the Fallen Horse Rescue also brought a mini burro (donkey) to the event. The organization teams up with the local law enforcement to help lost and found livestock, as well as care for and rehome large animals who are abandoned.

More than just providing crime scene cleanup, Aftermath supports the communities where our employees and customers live and work. Moreover, we work hard to cultivate relationships with first responders and other local organizations who provide primary care and service to thousands of citizens nationwide. To learn more about biohazard cleanup in your area, call 877-698-5517