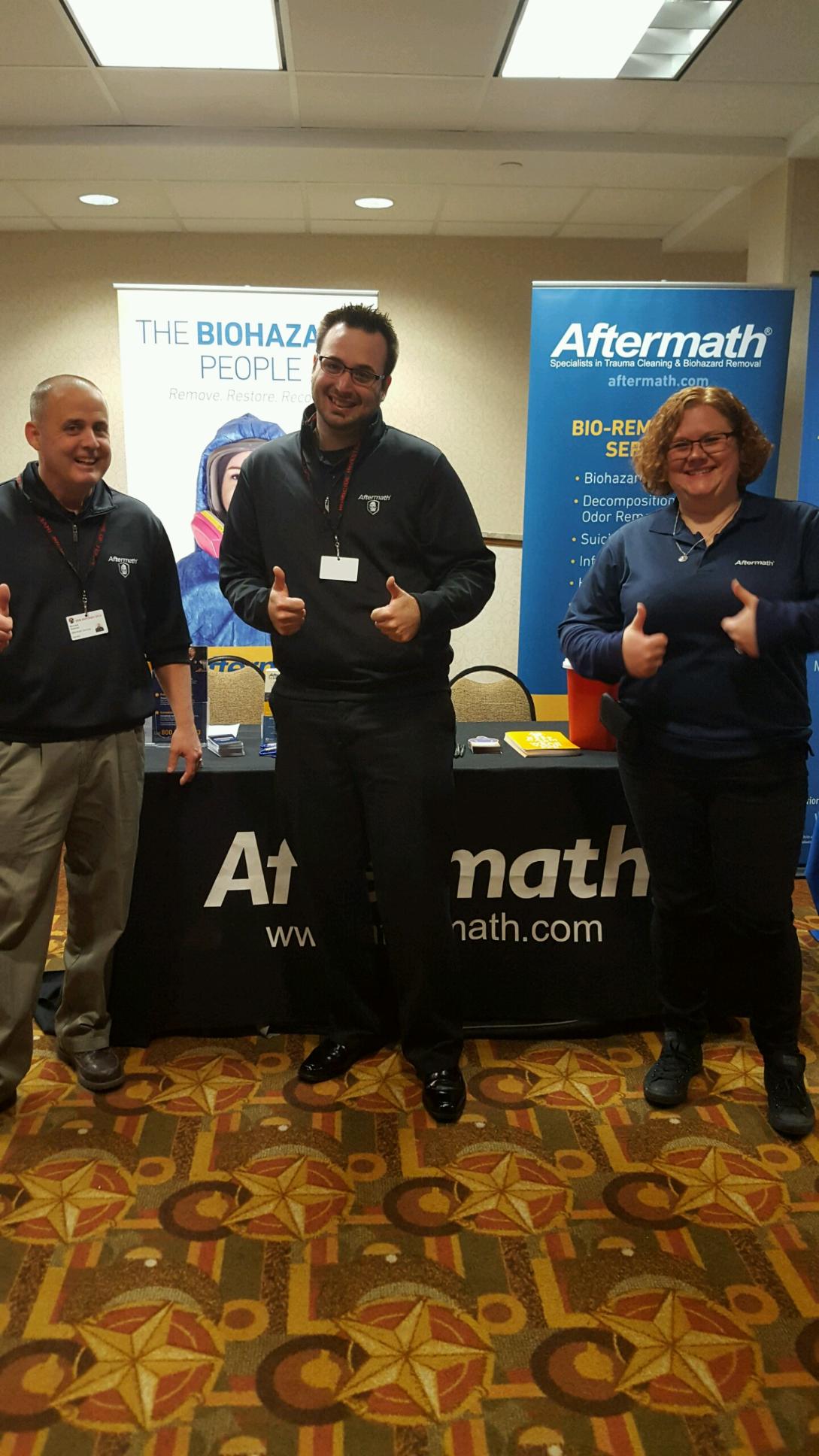 This week, Aftermath’s Mike Webster and Jeremy Friedrich attended the HITX Training Conference in San Antonio. According to the organization’s website, “The Homicide Investigators of Texas is a Non-Profit organization composed of City, County, State and Federal Police Officers, as well as Forensic professionals and Prosecutors in and around the State of Texas actively involved in Homicide investigations. This association of professionals has been organized to work collectedly to bring murderers to justice, as well as provide continuing education to those involved in the investigation and prosecution of the most severe crime against Humanity, that being the murder of another person.”

Over 150 detectives and other police professionals attended the conference, coming from all across the great state of Texas. This was Aftermath’s first time at the event, which provided us an opportunity to reach out to first responders and educate them on the topic of biohazard and crime scene cleanup. In addition to Mike and Jeremy, Kelsey, Supervisor for Aftermath’s Dallas/Fort Worth office, also attended for a day, giving the the detectives a first-hand look at how she and her crew help families.

The attendees were very welcoming; in most cases, they had already heard of Aftermath. However, they were interested in learning about what makes the company different from others. Other questions reflected their desire to better assist the families they work with; our invoicing and dispatch processes were subjects of additional curiousity. “There is a strong brotherhood among the detectives,” Jeremy remarked. “Everyone was there to guide each other on cases and also to learn new skills.” In this way, Aftermath’s educational mission fit perfectly with the tone of the conference.

Over the course of the event, the Aftermath crew met numerous interesting personalities. Several of the detectives were featured on the TV show, “The First 48,” and local celebrity, K9 cop Spirit, also stopped by the booth. Spirit started her career as a cadaver dog at the age of 9 months and is now 14 years old. As part of her many duties, Spirit helped to find victims after Hurricane Katrina.

To further spread the word about the importance of crime scene cleanup, Aftermath provided pens and notepads for the detectives to take home, as well as pamphlets, hand sanitizers, calling cards, carabiners, and air fresheners. The team also raffled off a Kindle Fire. While not at the conference, travelers toured local tourist attractions and visited some of the city’s excellent restaurants.

Mike and Jeremy were especially impressed with the southern hospitality exhibited by the conference staff, as well as the attendees. “Everyone was nice and helpful,” Jeremy said. “They made this event a great experience and were very easy to network with.” Aftermath would also like to extend a special thank you to President of the Board, Larry Davis, for teaching Jeremy a bit about Texas culture and the different games of poker! Thank you for making our team feel welcome.

We’re Here to Support You

Aftermath is proud to support first responders like those in Texas. In addition to contests like the PPE Giveaway, we also offere seminars and informational sessions on subjects like PPE and biohazard cleanup. If you are interested in learning more about how Aftermath can assist your department, check out our webpage for law enforcement professionals. For immediate help or crime scene cleanup, please call 877-872-4339.