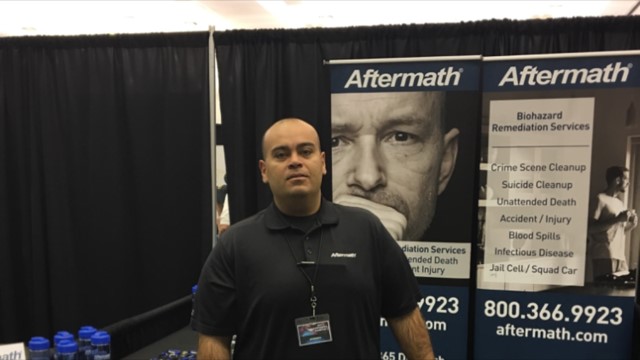 Grapevine, Texas is an area just north of Dallas and Fort Worth. With DFW Airport located nearby, it’s considered a transportation and convention hot spot. And at the end of July, over 500 law enforcement officers, namely sheriffs and sheriff’s deputies, converged on the Gaylord Hotel and Resort for the Sheriff’s Association of Texas’ 140th Annual Training Conference and Expo.

The Conference was attended by Aftermath’s National Director of Sales, Stephen Brown, and Senior Manager of Law Enforcement Relations in the south, Rolando Barrientez. Rolando described how Aftermath learned about the event: “This was our first year attending the Sheriff’s Association Conference. We’d heard about this show from several sheriffs and deputies who know of our services and encouraged us to attend. They felt there were others who could benefit from learning more about the company’s services and biohazard cleanup in general.”

Snapshot of a Conference

Most of those in attendance at the SAT Conference were sheriffs and deputies. The event included guest speakers, training workshops and numerous planned networking events. Governor Greg Abbott greeted the officers and deputies and gave the opening address and welcome speech. At the President’s reception, entertainment was provided by county music star Daryle Singletary.

Rolando stated that he felt It was a great event overall. “Most attendees made a point to stop by our booth during the show, and many came back a few times throughout the conference. Those who had not heard of us took the time and learned about the company; they asked questions and walked away with some of our table side goodies, too.”

Those goodies included some great giveaways: coffee cups, carabiners, pens, notepads, and air fresheners. Sheriff Brad Ingram of the Martin County Sheriff’s Office in Stanton, TX won the grand prize drawing: a 5.11 tactical bag and PPE kit. “This was a great show,” Rolando said. “Not only were the attendees were able to learn from me about AMS, but I also was able to learn about them and their unique role in law enforcement.”

Networking at the SATC

Throughout the exhibit hall, there were plenty of vendors and informative demonstrations to keep visitors engaged throughout the show. In addition, the Texas Commission on Law Enforcement was on hand, as well as the Texas State Comptroller and United States Postal Inspections Services.

Sheriffs were certainly curious about Aftermath as well. “Those who did not know of us were happy to learn that we provide service to 48 states,” Rolando related. “In Texas alone, we have 5 active teams ready to deploy 24/7/365 to assist families who are experiencing traumatic situations.”

From our managers to our technicians, almost all Aftermath employees agree that one of the best aspects of working for the company is knowing your efforts help families across the US. Texas is just one of the 48 states where our services are available; with each conference we visit, we’re getting the word out and reminding first responders and other professionals about the importance of proper trauma scene cleaning.

We’re also proud to show our support for those who put their lives on the line each day to help make their communities safer, better places to live. In addition to conferences, we also sponsor giveaways and grants like our #WhyWeServe Service Grant Competition. The contest ends 8/11, so support local law enforcement by casting your vote today!