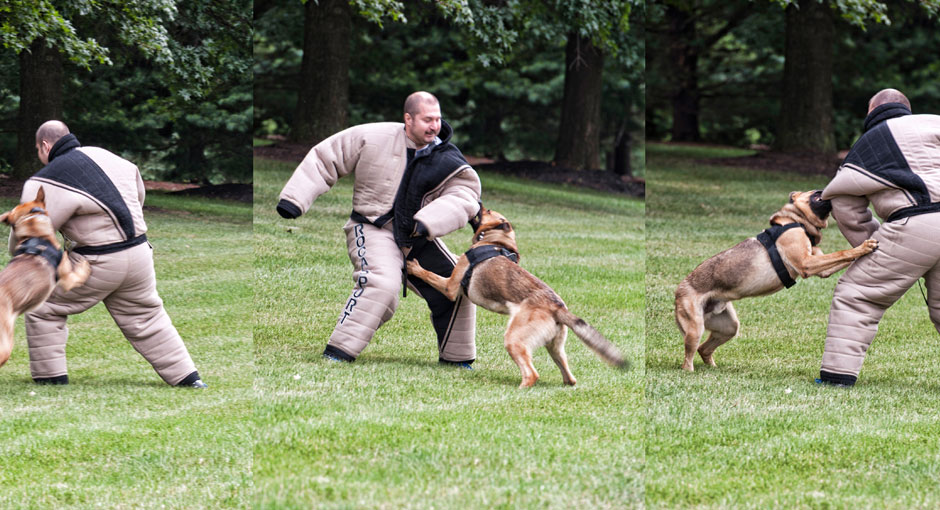 You pulled a vehicle over and you’re approaching the driver’s side of the car. As a police officer, you know within seconds this car should be searched for illegal narcotics and possibly weapons. With a driver and two passengers in the vehicle, you realize this situation could get heated, even with the additional squad car backing you up.

For one Pennsylvania police department, thanks in part to a donation from crime scene clean up company Aftermath, that’s where Rocco comes in.

Rocco, a mix of German shepherd and Belgian Malinois, is the police K-9 officer for the Lower Allen Township Police Department. He was acquired with the help of grant awarded to the department after winning a contest held by Aftermath, a company specializing in biohazard cleanup.

According to Frank Williamson Jr., chief of police and public safety director for the Lower Allen Township Police Department, Rocco has the ability to not only locate drugs, but can dictate the mood for situations which have the possibility to escalate.

“His presence, the barking you can hear in the background, can set the tone,” Williamson said about Rocco. “I believe people can hear Rocco and it lets them know it’s a serious situation.”

Rocco was brought on by the department in March of 2013, but acquiring a police K-9 isn’t like visiting your pet store or animal shelter and returning home with a puppy. Adding a K-9 to a police force can be a long, painful process because of the costs involved.

Why Rocco is Worth It

The department was seeing a 100 percent increase in drug-related arrests between 2005 and 2008, which led Williamson to realize a K-9 would be a great asset.

A 2007 incident in which a traffic crash involving a tractor-trailer led to police finding thousands in cash and approximately 200 kilos of cocaine got people on the force thinking about adding a K-9 to the department. “That incident indicated a need for a police K-9,” said Officer Michael Scarlato, a seven-year veteran of the department and Rocco’s handler. “A K-9 in that situation could have assisted in the search.”

Williamson approached the Board of Commissioners with his request and was told he could add a K-9, but would have to raise the money himself. No tax dollars would be used for the purchase, training or maintaining of the dog, which can run close to $20,000.

Raising money for the K-9 was difficult, and had actually slowed to a point where nobody on the force truly believed a K-9 would ever be added. But, hope was again restored when one day when Williamson was told a company was on the phone and that he had won something. “I thought it was just another sales call,” Williamson said.

Williamson had entered a contest soon after getting approval for the K-9 from the Board of Commissions, but like most contests, had forgotten about it. “A person in the office said, ‘You better take this call. I think you won something.’ So I got on the call and it was Aftermath,” Williamson said.

In 2012, Aftermath announced the K9 Grant campaign, designed to assist a police department in acquiring a K-9. A single winner would receive an $8,000 grant. “We see the results of violent crimes on a daily basis, so we recognized the need to support law enforcement in an effort to reduce crime,” said Dana Todd, Chief Marketing Officer of Aftermath. “Aftermath will continue to support law enforcement through this and other programs which give back to the community and help protect people.”

The grant from Aftermath turned out to be the kick start the department needed. “That money from Aftermath was big for us,” Williamson said. “It jump started our fundraising and it took off from there.”

Eventually the fundraising efforts netted enough to purchase and train a K-9 (about $16,500) and, after a short search for the right dog, Rocco became a member of the Lower Allen Township Police Department. Rocco was the first K-9 added to the department in over 40 years.

Scarlato and Rocco continue to train together, and the department has aseen the positive impact Rocco has had on the community. Rocco has assisted on over 30 searches, including an incident that resulted in the arrests of two heroin dealers. “Rocco searched a home and found over 120 packs of heroin in a suitcase located in a closet of the home,” Williamson said.

Update October 2017: Rocco continues to aid the Lower Allen Township Police Department by serving as a loyal partner in the fight against crime.