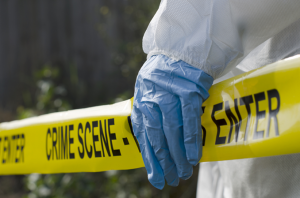 In some situations, Aftermath technicians must contend with more than just blood, bio or the risk of bloodborne pathogen exposure. In highly publicized cases, media attention can make cleanup more difficult. Additional vehicles, curious bystanders asking questions, and increased police presence can lead to further stress on the family or property owner. When the incident occurs in a place such as a government building or retail establishment, protecting the health of the public is top priority. However, it is also a primary concern for owners to return their place of business to a normal state as swiftly as possible.

On a May afternoon in 2014, a Hartford area business phoned the Hartford Aftermath office for assistance. A customer had opened fire with a handgun in one of the company’s local stores, injuring himself and one other. Fortunately both individuals survived, and the criminal was later charged with attempted homicide.Aftermath excels at maintaining customer privacy throughout the cleanup process. Technicians arrive in non-descript vehicles and conduct themselves professionally in even the most difficult situations.

When Aftermath visited the scene, they were greeted by a heavy media presence. Wading through the crowd, they made contact with a company representative who informed them of the situation. The supervisor was escorted through the crime scene, and made notes of the situation. The incident had occurred in one of the store’s shopping aisles, and drops of blood and bio were visible in several places.

Before beginning work, technicians were instructed to direct all questions to the property manager. Furthermore, in order to protect the company’s privacy, it was agreed that Aftermath would wait for news trucks to leave before performing any work.

After waiting several hours for the media to disperse, the supervisor was finally given the okay from the customer that it was safe to start work. Inside the store, Aftermath technicians set up zones to prevent cross contamination with unaffected portions of the establishment. Next, they applied Biotic Solvent to the tile floor in the area where the incident occurred, then wiped down the area to remove as much of the blood as possible. After, they applied the same remover a second time in order to help loosen any dried or remaining bio. Finally, any tiles that could not be cleaned were removed with hand tools and the floor underneath affected tiles was also treated. They also repeated a hard surface wipe with Extreme HP and scrubbed affected grout with wire brushes to achieve a maximum level of cleanliness.

When all visible traces of blood and bio were removed and the treatment was completed, technicians employed an ATP test to look for any remaining signs of bacteria. ATP tests use very sensitive equipment to immediately report any traces of living or organic matter on hard surfaces such as walls or floors.

Once the test results reported that the scene was free from bacteria, the technicians carefully packed up their gear while the supervisor went over the paperwork with the store manager. The customer expressed his gratitude and reported that he was pleased with the job. The supervisor photographed the completed work and submitted his final report to both Aftermath and the customer’s home office.

Aftermath provides biohazard crime scene cleanup services throughout Hartford and nationwide. To learn more about the benefits of professional trauma cleaning, or to find out more about commercial services or corporate accounts, visit the Aftermath website or call 877-872-4339.