What Would it Take to Clean Up Our Favorite Horror Movie Scenes?

Halloween is almost here! It’s time to embrace the chilly weather, lament our waning moments with daylight and, of course, cuddle up and watch our favorite horror films. Getting your thrills from spooktacular movies is always a treat, but have you ever wondered what it would take to clean up after some of the grisliest scenes in horror history? Here we look back at some classic horror films and their most gut-wrenching scenes to see what it would take in real life to clean, remediate, and disinfect them.

The crime scene cleanup crews at Aftermath Services love a good challenge, so we asked our field supervisors what these hypothetical cleanup processes would look like.

When you think of classic horror, the first thing that comes to mind is Alfred Hitchcock’s Psycho. This standard-setting thriller’s twist ending (spoilers ahead, if you’re 60 years behind the times) reveals that the antagonist’s mother had been dead *gasp* THE WHOLE TIME! 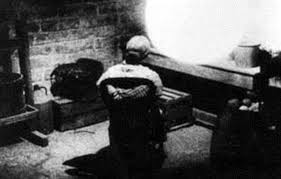 In this classic 80’s slasher film, now-renowned actor Johnny Depp made his very first film appearance. Fans of the movie will also remember that it didn’t go very well for his character. As he lays in bed drifting to sleep, two arms suddenly pull him down into the bed and he quickly meets his demise. Seconds later, a massive geyser of blood shoots upward, flooding his bedroom ceiling as if gravity had been reversed. 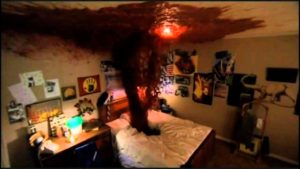 Geyser from A Nightmare On Elm Street, 1984

When it comes to phrases you never want to hear your kids say, “Captain Howdy says no.” tops the list. The Exorcist is about the demonic possession of a 12-year-old girl and a priest’s mission to exorcise it. The demon, referred to as the innocent-sounding ‘Captain Howdy’, forces the girl to say and do grotesque things — one of which was vomiting uncontrollably (watch at your own risk!). 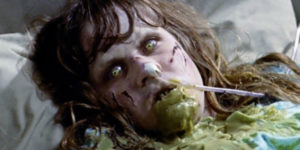 “In space, no one can hear you scream.”

Although Aftermath has dispatch centers that allow us to service anywhere in the US, unfortunately, outer space isn’t yet in our network. But while reaching the Nostromo spaceship from the film Alien is in itself quite a feat for us, so too, would be disinfecting the ship of any biological remains. Fans of the series may recall that the Xenomorph’s blood contained extremely powerful acids that could burn through any material very quickly. However, one member of the dear-departed spaceship crew did leave behind biohazards after a baby Xenomorph famously burst out of his chest (in the kitchen, no less!).

For more detailed information on biohazard cleanup, blood cleanup and other information regarding the Aftermath scope of work, visit our many online resources. Have a happy Halloween!