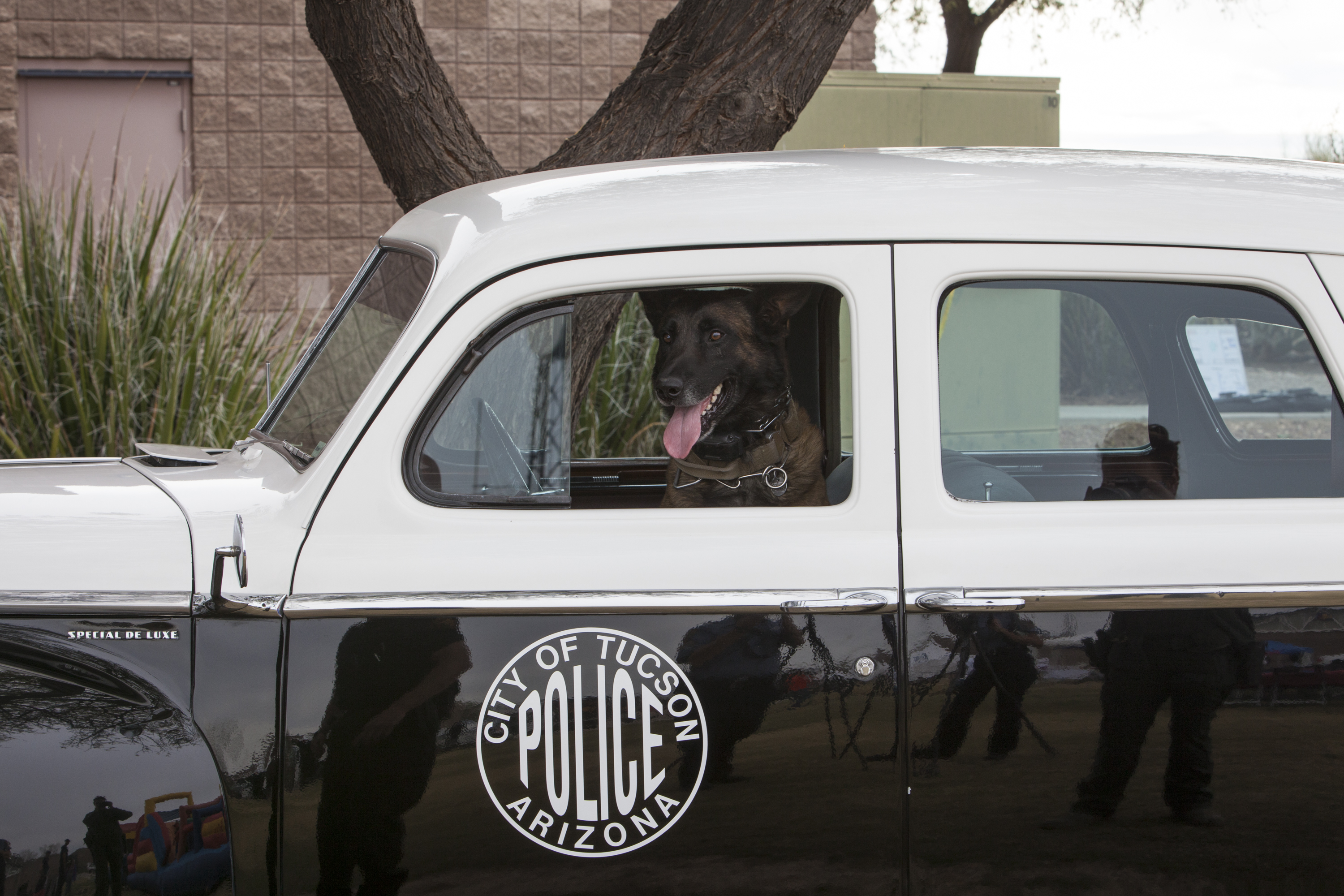 Two weeks ago, Aftermath’s announced the winners of the 2018 K9 Grant Competition. During the month-long competition, over 1,000 police departments were nominated and more than 280,000 votes were counted. Winning departments included agencies in Connecticut, Pennsylvania, and Arizona. K9 units in 48 states were represented in this year’s contest and over $20,000 in grants were awarded to 14 departments.

As November is National Gratitude Month, Aftermath is continuing to demonstrate our appreciation of these brave officers, both human and K9 alike, by showcasing their achievements and sharing their stories. Read on to learn more about our second place winners, the Tucson Police Department of Tucson, AZ. We hope you enjoy getting to know these hardworking officers as much as we did!

A Department in the desert

Tucson is a large city of over 536,000 people, located in Arizona. As the city grows, both violent and property crimes increase. Because the area is close to the border of Mexico, narcotics trafficking is of major concern.

The city employs over 800 law enforcement officers, but Sergeant Paul Sheldon states that having K9 backup makes the department feel as if they have more officers than they actually do. “We’d be hard pressed to find a more valuable tool for law enforcement,” he says. “The dogs help keep our officers and communities safe, and they love what they do.”

Tucson’s large K9 Unit has been active since 1972. They currently have 9 K9s, including 2 in training and several seniors. Though their current roster of dogs are mostly malinois, Sgt. Sheldon says the Department doesn’t have a breed preference; all dogs are selected for compatibility. K9 Officer Riley, the Department’s most recent retiree, is a shepherd-malinois mix. All dogs are purchased from Adlerhorst International LLC in Riverside, CA; the agency has been working with Adlerhorst for 30 years.

All of Tucson’s K9s are trained to be dual purpose, which means they are capable of both narcotics detection and subject apprehension/patrol. The department’s current K9 roster includes: Nova, Kiro, Bosco, Bolt, Blitz, Evo, Luna, and two new dogs yet to be announced.

One thing that makes Tucson’s K9 unit special is the friendliness and personalities of the dogs. “Each of the dogs act a little like their handlers,” Sgt. Sheldon reports. “They call it “traveling down the leash. The dogs each have some sort of quirk, usually picked up from their handler. They’re just a ton of fun to be around.”

Bosco likes to jump on everything; he is known to jump on desks just to say hi. Evo is a natural comedian; he is a nut for a toy and will do anything for his handler. All of the K9s enjoy being petted and played with, and their handlers go out of their way to ensure that people are comfortable around them. The department does demonstrations and even invites members of the community to (safely) step into a bite suit to learn more about these amazing animals.

They also attend expos and events where the dogs compete and hone their skills. As part of the Arizona Law Enforcement Canine Association, K9s Evo and Bolt participated earlier this year in the Desert Dog Police K9 Trials in Mesa, AZ. They took 6th place overall, 1st place in building search, and 2nd place for narcotics detection.

The Tucson K9 Unit is very active on social media, which is partly how they were able to take a winning spot in the 2018 K9 Grant Competition. They feature photos and stories on Facebook, Twitter, and Instagram.

Plans for the future

Despite the size of the department and the community it cares for, money for a K9 unit still presents a challenge for Tucson. Sgt. Sheldon stated that the department is currently outfitting the warehouse they have been using to serve as an official training facility; they haven’t had a real facility many years. Immediate plans include installing obstacles and new flooring, and the department has already earmarked half of the grant money to build a scent wall at the facility. Any remaining funds may go toward an updated bite suit, also used in training.

Sgt. Sheldon says the K9 Unit hopes to expand their forces in the future, and these changes will help the dogs be better prepared. “Ideally I would love to see 4 dedicated narcotics dogs join the team,” he says.

A community that cares

We enjoyed speaking with Sgt. Sheldon and the officers at Tucson PD, and we’re looking forward to introducing you to more of the K9 Grant winners in upcoming weeks. Be sure to keep an eye on our blog for great interviews and photos with the rest of this year’s winning pack!

Aftermath’s annual K9 Grant is just one aspect of the Aftermath Cares program, aimed at acknowledging first responders for their ongoing efforts to protect and improve their communities. For more information on trauma cleaning services, or to learn more about the relationship between Aftermath and law enforcement, visit our website.