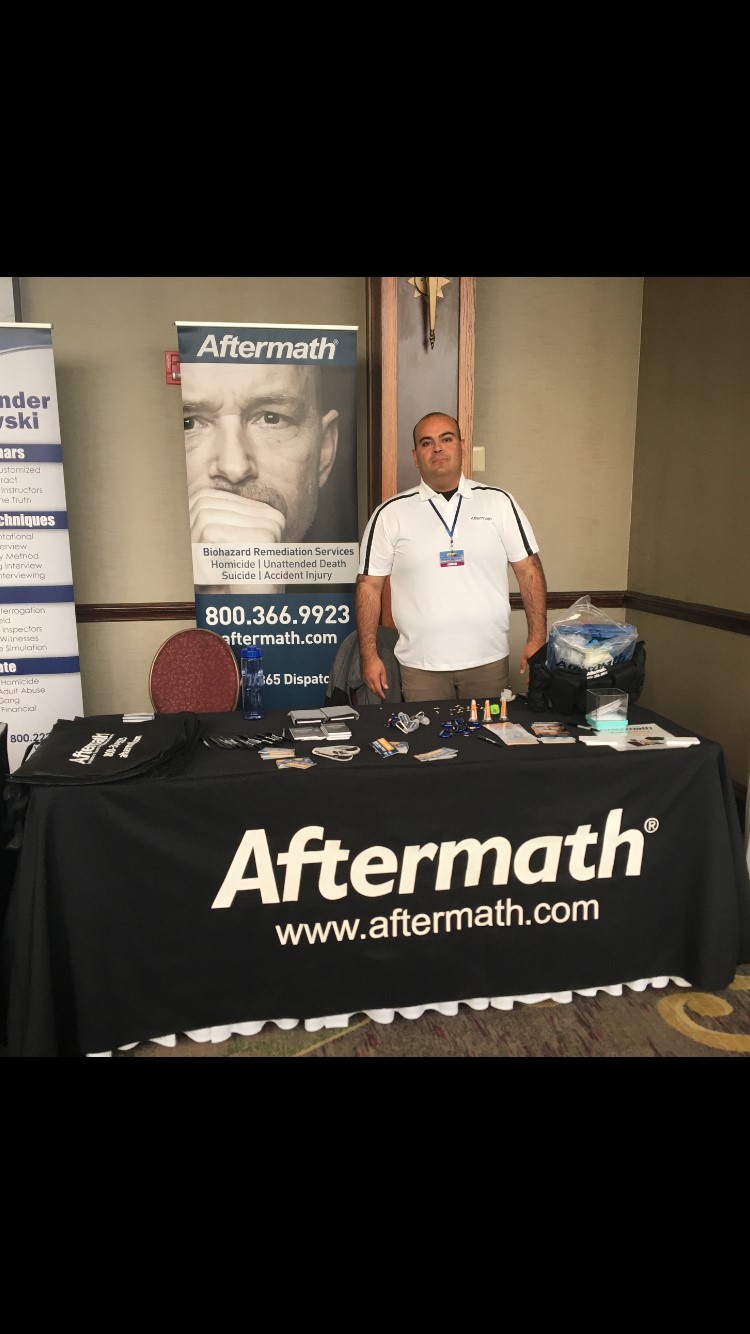 Last week, Aftermath’s Senior Manager Law Enforcement Relations, Rolando Barrientez, traveled to Dallas, Texas to attend the Southeastern Homicide Investigators Association Conference. Visitors to the yearly event include homicide detectives, crime scene investigators, state and district attorneys, and others who are “responsible for the tireless pursuit of justice for the victims of homicide and their families.”

Attendees took part in a wide array of workshops, peer-led discussions, and continuing education courses. Topics of these sessions ranged from the Michael Jackson death investigation, to the Pulse Night Club tragedy and a case study on serial killer Todd Kohlhepp. The keynote speaker for the event was US Army Captain ret. Chad Fleming, member of the Army’s elite 75th Ranger Regiment and one of the few amputees permitted to deploy after suffering serious injury.

Between meetings and events, attendees were encouraged to visit the vendor hall and complete a “bingo” card for prizes. This helped keep traffic steady throughout the event. As usual, the Aftermath booth had plenty of giveaway items in stock to encourage visitors. Rolando also hosted a drawing for a 5.11 tactical bag and PPE kit. The winner was Senior Investigator Tom Clark of the Spartanburg County Sheriff’s Office, of Spartanburg, SC.

What SEHIA Members Are Saying

“The attendees who stopped by thanked for us being a part of the conference,” Rolando said. “Many of those in attendance had already heard of AMS. It was great to reconnect with some investigators who I have met at previous law enforcement conferences. It was also great to recognize the names of others, who we have corresponded with or who were referred to us by other law enforcement organizations. It was nice to put a face to a name.”

Of course, the hot topic among attendees who stopped by was the 2017 K9 Grant Competition. “Plenty of detectives talked to me about the K9 grant since the winner was announced the week before the conference.” However, one of the most rewarding discussions was with a detective who had experienced the company’s work firsthand:  “One of the homicide detectives stopped by and told me she was impressed with the work we performed for a family who exp a murder-suicide. Others dropped by to say that they’d used our service themselves, or shared our information with families. They stated that they appreciate our professionalism and the service we provided.”

Those who had not worked with Aftermath were interested in learning more. “They were pleased to hear that we assist families with in-house financing programs, as well as working with victims assistance, insurance, and other aid options,” Rolando reported. Common questions included response times and locations, as well as inquiries about how the no obligation estimate works. “Overall,” Rolando concluded, “SEHIA was a very productive and interesting conference for Aftermath.”

The holidays are fast approaching, but we’re already gearing up for the 2018 conference season. Next year’s SEHIA Conference will be held in November 2018 at the Hilton Baton Rouge Capital Center in Baton Rouge, LA. We hope to be able to visit SEHIA members again and hear more stories of families who’ve been helped by our services.

To keep up to date on where we’ll be through the rest of this year and into next, be sure to find us on our special Facebook for law enforcement, or tweet to us @aftermath90 on Twitter.