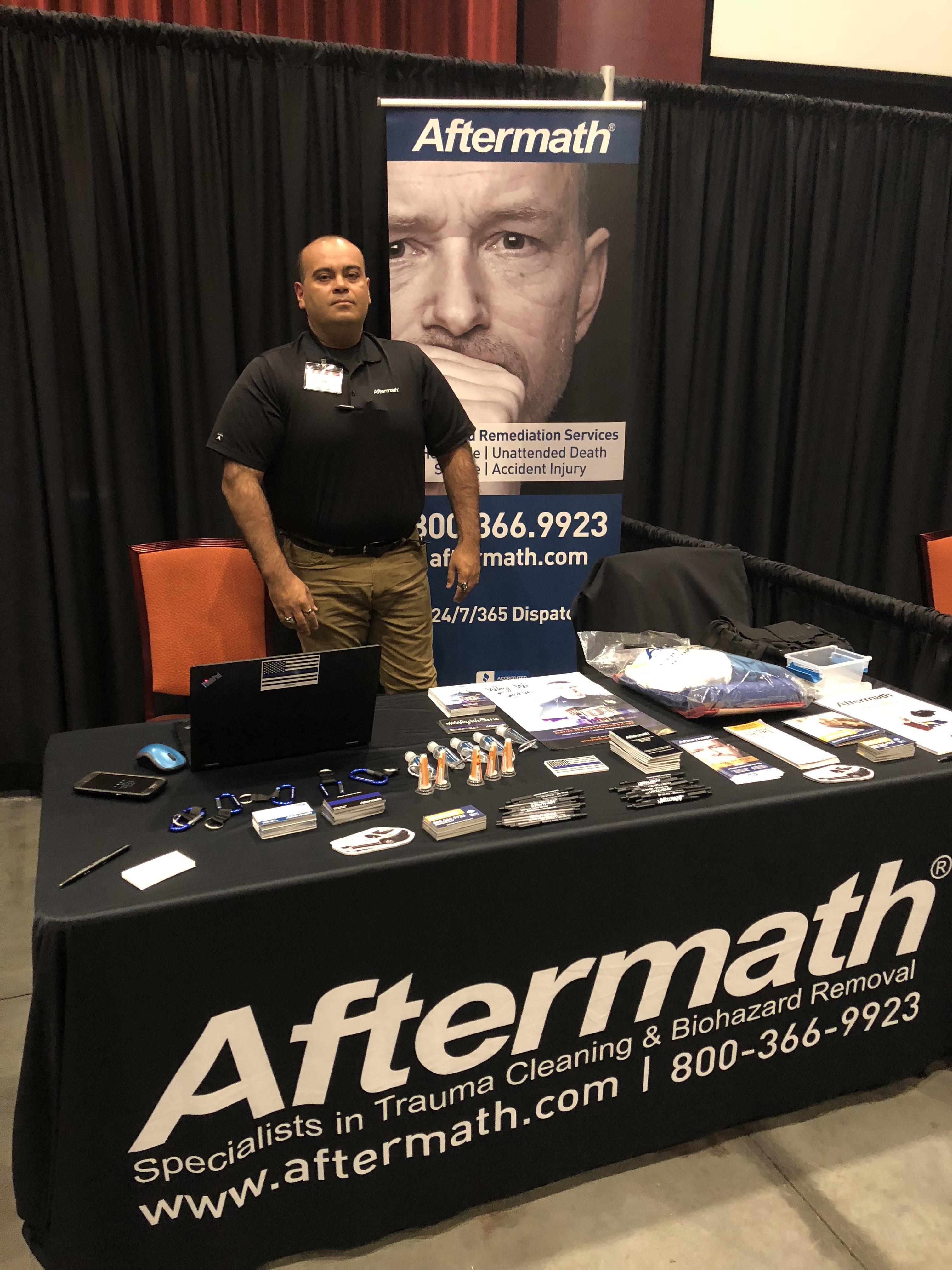 Last week, over 200 police chiefs and other law enforcement agents gathered at the Choctaw Casino and Resort in Durant, OK for the annual Oklahoma Association of Chiefs of Police Training Conference and Exhibitor Show. For the second year, Senior Manager of Law Enforcement Relations, Rolando Barrientez, attended on behalf of Aftermath.

According to the organization’s website, “The OACP is an organization of law enforcement executives and their command support staff who promote professionalism in Oklahoma law enforcement.” The organization provides support to a wide number of agencies, in cities and towns of varying sizes. As part of the group’s mission, events like June’s training conference keep OACP members informed about important topics and technologies in policing.

Much To Do and See at OACP

On Monday, OACP hosted a golf tournament, followed by meetings and the expo on Tuesday. Almost 200 members attended, including chiefs, captains, and lieutenants, as well as officers and investigators. Vendors included tactical supply companies, computer software, uniform providers, and more.

Several charities and major non-profit organizations were represented at the conference this year, including the Oklahoma Special Olympics and Torch Run, featured on the Aftermath blog earlier this year. Bikers Against Child Abuse, the National Child Safety Council, and the Emergency Responders Assistance Program also had booths. The Oklahoma Blood Institute and Total Wellness performed health screenings and hosted a blood drive on site.

Tuesday night there was a meet and greet, encouraging vendors and attendees to mingle. Entertainment included casino games, slots, and You Be the Star Karaoke, plus food and drinks. At the expo, door prizes were awarded and several vendors also hosted raffles to draw audiences to their booths. Aftermath gave away a 5.11 Tactical Bag and PPE kit. This year’s winner was Chief David Houser of the Durant Police Department.

In the vendor hall

At the event, officers had an opportunity to speak to vendors directly about their products and services. Visitors to the Aftermath booth asked Rolando many informed questions about Aftermath’s services, including the price of services and how no-cost estimates work.  “They were glad to know that we provide the family time to recuperate from the loss and financial obligations during traumatic situations; we work with the insurance company before the families even see a final bill, so they have a clear picture of what they are responsible for.”

There were also plenty of OACP members who had already heard of Aftermath, and were excited to welcome Rolando back. Many stopped by to share that they had Aftermath magnets or brochures in their office, and that they had recommended the service to families in their area. There were also several chiefs who had worked with the company. Said Rolando: “Those who have worked with us expressed that they were pleased with our attention to detail, and our availability and willing to travel the state to assist the families. Others said they were happy to learn that we do not only service metro areas, but provide services across the state and in the rural areas. We even have offices in nearby states that could also be called in to assist them if our other offices are too distant or working to help another family at the time of their call.”

Rolando said that the 2019 OCPA conference will be “the conference to attend.” “This is already an amazing show,” he explained. “The board is planning ahead by sourcing new ideas for next year, and they are very open to feedback from members and vendors.”

The OACP Training Conference and Expo is one of many Law Enforcement conferences Aftermath has attended in 2018, and we have many more to come. Keep an eye out for us at your next local expo, or stay in touch with us through Facebook or Twitter. Moreover, don’t forget to enter our Why We Serve Service Grant competition, going on now through July 9th. Aftermath is awarding several officers and community organizations grants to help pursue their missions, so be sure to nominate yourself or another officer!