On May 22nd, Aftermath joined nearly 800 funeral directors and professionals at the 2018 OFDA Convention and Exhibition. Sponsored by the Ohio Funeral Directors Association, the conference was held at the Hilton Columbus at Easton, in Columbus, OH.  Visiting from Aftermath was Ben Dirks, Funeral Home and Fire/EMS Specialist. During the three-day event, Ben shared his knowledge of biohazard cleaning and his experience in the death care industry with funeral directors and other industry professionals. Here’s what he had to say afterward:

The Ohio Funeral Directors Association was formed in 1881 and remains one of the largest state associations of its kind in the nation. According to the OFDA website, more than 900 Ohio funeral homes are part of the organization. The overall goal of OFDA is to support members in a way that promotes the best practices of the funeral industry. To achieve this, OFDA offers its members special educational and training opportunities, plus a wealth of information and industry experience, and peer and business-to-business networking.

The convention format consisted of seminars and provided the continuing education hours required by the state of Ohio for all funeral directors.  There was also resource-based training and informal activities to encourage information sharing and networking among attendees.

Earlier this spring, Ben made the decision to attend OFDA and several other state-associated conferences in lieu of larger events of a similar nature.  “We typically attend the NFDA (National Funeral Directors Association) Conference every year, but for 2018 I decided to try and focus locally so I could spend more time with directors. OFDA is still a very well attended conference, but it was much easier for me to take time with those who stopped the booth.”

To this end, Ben was already hard at work before the conference officially began. The students of the Cincinnati School of Mortuary had the chance to walk the exhibit floor before it opened to registered attendees. Though it was likely Aftermath’s collection of giant stuffed microbes that initially drew them to the booth, Ben stated that the group asked insightful and engaging questions. “It was great to see a younger generation interested in the topic of funeral services,” said Ben.

A Break From the Everyday

The death care business can be emotionally taxing, so many booths attempted to bring an element of lightness to an otherwise serious subject without offending their audience. Attendees had the opportunity to participate in a biohazard game, and Ben passed out a few Giant Microbes as prizes. He also handed out resource guides, pens, and carabiners while discussing the company’s services. Aftermath also hosted a drawing for a $50 American Express gift card; Sandy Neely, Owner/Funeral Director of Hanson-Neely Funeral Home in Ada, OH, was the winner.

Some attendees made an occasion out of the convention, and brought their spouses and families to enjoy the city and hotel. After the first day of events, OFDA put on a casino themed party that Ben said was very well attended: “The party was a great chance to network with other professionals in a no-stress, low key environment. The directors appreciated being able to sit back and escape from their work.” 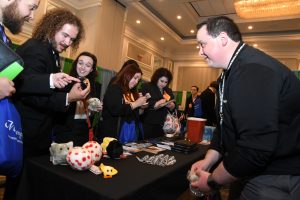 AN Important Resource for the Industry

Following the convention, Ben stated “I think the reason why directors were happy for us to be there was because they didn’t know what cleanup resources were to available to help families going through traumatic situations. For those who stopped by the booth, I feel the biggest take away was just having an answer for that family that needs their home cleaned. Many directors asked about our Ohio locations, and took comfort in the fact that we had 2 in-state locations to be able to serve their communities quickly.”

We are grateful to OFDA for allowing us an opportunity to showcase our company at this year’s event. Meanwhile, if you are a director and are looking for more information on our director programs, please check out our webpage.