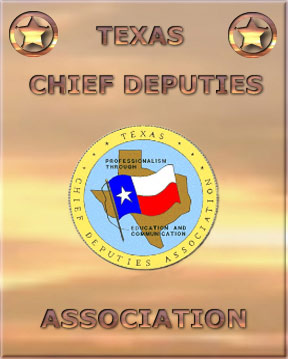 Last week, Rolando Barrientez, Aftermath’s Senior Manager of Law Enforcement Relations, visited the city of Kerrville, Texas to attend the 32nd Annual Texas Chief Deputies Association Conference. It was the company’s first visit to the event. “The Chief Deputy of Gillespie County extended the invitation to us last year,” Rolando explained, “but it was short notice and we could not attend. It was wonderful to finally have the opportunity to do so this year.”

From the start, Roland said he felt welcomed by the enthusiastic group. Kerrville is located in Texas Hill County, surrounded by hills, trees, rivers, wineries, and county life. Rolando reported it was a perfect backdrop for a great event. “The day of set-up, TCDA organized an outdoor BBQ and provided entertainment for the exhibitors and attendees to meet and greet. We all enjoyed the great food, live music and entertainment. In Texas, BBQ, music, and drinks are the best way to get to know one another. There was even a corn hole tournament in the evening.”

The southern hospitality extended into the rest of week. “There was another BBQ on Tuesday night, and each day of the conference included ample time for breaks, including coffee and drinks in the exhibit hall.” Rolando described the members and conference staff as involved and engaged. “The conference always had a staff member or a chief deputy walking around to check in with the vendors,” he said.

What is a Chief Deputy?

The role of a chief deputy is unique to the state of Texas. “In Texas, Chief Deputies are typically 2nd in command and oversee the day to day operations for the sheriff,” explained Rolando. “They are the known the decision makers for many of the agencies.” Though most TCDA members are chief deputies, they brought other members of their agency with them to the conference, including sheriffs, captains, lieutenants, and investigators.

Furthermore, a large number of chief deputies work in rural areas; this means they are hard to reach out to in person. Rolando relies on email and phone calls to introduce himself and Aftermath. As a former Sheriff’s Deputy, Rolando is able to relate to the attendees in that regard: “Many I spoke with are from rural Texas and several hours from any of the metropolitan areas. They were happy to hear that we respond to service requests throughout the entire state of Texas.”

One of the best parts of attending a new conference is introducing the company to a fresh audience. Rolando described one interaction he had with a chief deputy and his wife (also in law enforcement), who had only recently heard of Aftermath: “They told me that they had seen the Aftermath truck out in the field when they were visiting their daughter, an RN at a local hospital. The daughter was aware we were called to help a family in the area, but the pair had never heard of Aftermath until then. Coincidentally, a few days later they met me at the conference and were interested and excited to learn more about the company.”

While Aftermath was new to some, other attendees shared stories about their personal experiences with the company. “One retired Chief Deputy told me that his county had a few incidents that required Aftermath’s help. He referred us because our great work and attention to the family, the job and the law enforcement community. He told his story to two other Chief Deputies at the booth, and stated that if they didn’t already refer us, they should start. One family was so pleased by our work that they called him personally to tell him how relieved they were. It was quite a compliment for both the company and the agency.”

Looking Forward to the Future

TCDA is over for the year, but Rolando and the rest of Aftermath’s Law Enforcement Relations team are looking forward to more shows, expos, and conferences this year. We’re also proud to announce that our annual service awards program is going on right now! Our Why We Serve grant is meant to honor local heroes who go above and beyond to help members of their communities. Now through July 9th, you can nominate yourself or another officer for one of the Why We Serve grants. Just visit our entry page for more information.

And if you can’t meet us in person this year, please visit our page for law enforcement to learn more about our relationship with law enforcement and how we can help you and your fellow officers.