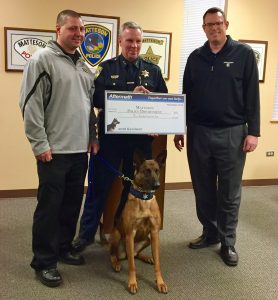 Matteson, IL (January 24th, 2017) – Yesterday, the Matteson Police Department of Illinois was officially presented a $500 grant as part of the Aftermath K9 Grant Competition, held in October of 2016. The department placed 5th out of over 3,000 nominees in the month-long competition. Winners were chosen by popular vote.

Jayda is a 3 year old Belgian Malinois.  After completing a 10 week training course last month, she is now on solo patrol. Though she’s still a rookie, Jayda already has a big bust under her belt: she recently assisted with a search and discovered 8 lbs of marijuana and $56,000 in cash. Jayda is not the first dog on the beat in Matteson. She replaced K9 Officer Xanto, who retired from the force in December at the age of 9. Xanto is now living out his retirement with Officer Strappazon, who was also his partner on the force.

Jayda is young and very energetic. Her reward for good work is time spent with her favorite toys. She is most attached to her yellow ball, and after drug busts she’s awarded with a tug toy made from pieces of old fire hose.  The K9 officer is also multi-lingual; she understands commands in Dutch, German, Spanish, and English. As with some of her human counterparts, police work runs in Jayda’s family; her father was a K9 officer for the Decatur PD, and her daughter was just sworn in as an arson dog for the Matteson Fire Department. Not to be outdone, her son is currently in training to be a police K9, too!

According to the department, the $500 grant from Aftermath Services will be used to help pay for Jayda’s continued training. Chief Michael Jones relates: “Most people don’t realize how expensive it is to have a K9 unit. Jayda and Officer Strappazon train every week. Added to that are costs to maintain special equipment.  We are thankful for the Aftermath grant because there isn’t always funding available.”