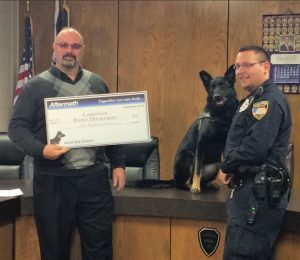 Larksville, PA (November 16th, 2016) – This Wednesday, Aftermath’s Senior Manager of Law Enforcement Relations, John Tyler, presented the Larksville Police Department with a $500 grant as 4th place winners in the company’s 5th Annual K9 Grant Competition. Over 3,000 police departments were nominated and over 152,000 votes were received during the event, which ran from September 30th until October 31st. Other winning departments included agencies in New Mexico, Illinois, and New York.

Larksville is a small town, with a population of approximately 5,000. Neighboring towns are similar in size, which means that they often share resources – including the services of K9 Officer Una. The K9 unit project was originally spearheaded by Larksville resident Donna Michak. Thanks to Michak’s fundraising efforts and the generosity of the local community, Officer Una joined the force three years ago. The town was also able to purchase a custom squad car to safely transport the K9, as well as specialized equipment and routine care.

On most weekdays, Una and her handler, Officer Josh Evans, are stationed at the local high school. They also perform traffic searches, narcotics busts, and bomb sniffing duties. According to Larksville’s Chief Edwards, Una is a bit of a celebrity in the Larksville area, and it was her popularity with the community that helped her take 4th place in the competition, gathering more votes than thousands of larger police departments nationwide. Chief Edwards also credits social media, particularly Facebook, with playing a big role in Una’s success.

Community donations continue to be the prime source of funding for the Larksville K9 unit. However, this year brought extra challenges: a local store owner who had hosted auction benefits for the unit in years past moved out of the area. This made winning the Aftermath grant even more important to the department. Chief Edwards states that the $500 Aftermath K9 Grant will go toward providing for Una’s basic needs.

“Having a K9 unit has brought us closer together and the results have been a more effective police department,” Chief Edwards relates. “The K9 grant has continued to push that message; we now have even more people on our side.”