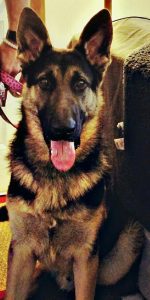 Alamogordo, New Mexico (December 9th, 2016) – Last Friday, Aftermath’s CEO, Doug Berto, presented Chief Daron Syling and the Alamogordo Police Department with a $5000 check to help fund the department’s new K9 unit. The award comes as part of the company’s 5th Annual K9 Grant Competition. Over 3,000 agencies were nominated and over 152,000 votes were received during the month-long event, which ran from September 30th until October 31st. Alamogordo took first place in the competition; they share the winner’s circle with departments from New York, Illinois, and Pennsylvania.

Alamogordo is a small community of 34,000 people, located in Otero County in southern New Mexico. Winning the K9 grant is almost bittersweet to the Alamogordo PD, as the idea for a K9 unit was first introduced by Officer Clint Corvinus, a four-year veteran of the department. Tragically, Officer Corvinus was killed in the line of duty in September, shortly after meeting to discuss the prospect with Alamogordo’s Chief Syling.

Following his death, members of the community assumed the officer’s cause and raised funds to help start the program. After a late start in the contest, the compelling story of Officer Corvinus helped the small town take first place. Coupled with the $5000 grant, the publicity the department  helped put Alamogordo on the fast track to achieving Officer Corvinus’ dream.

With a few additional donations, Alamogordo was able to realize their goal last month, when they welcomed a 10 month old German Shepherd to the team, fittingly named Clint. K9 Officer Clint will be arriving in Alamogordo on Wednesday, December 13th and will complete his training with Chief Syling. Throughout the interview, Chief Syling spoke of his gratitude and that of his department: “We just want to say thank you to Aftermath and to the community. We really went nationwide. People were voting from all over the country. From Florida to California, we felt a lot of love from coast to coast. This is something that we can all be proud of.”