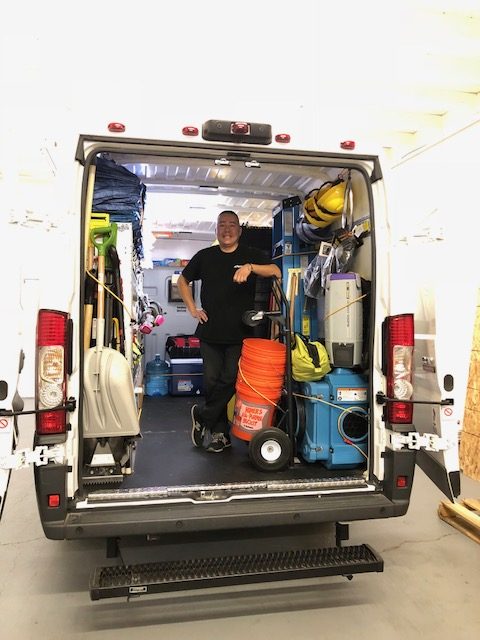 Today we speak to Aftermath’s newest supervisor, Filbert Begay of Albuquerque, New Mexico. With an extensive and interesting background that touches on law enforcement, the military, and even the funeral industry, Aftermath is proud to welcome Filbert and the Albuquerque Office to our nationwide team.

Home on the Range

Filbert grew up on the Navajo Nation Reservation near Four Corners, where the states of Arizona, Colorado, New Mexico, and Utah meet. In addition to serving time in the Marine Corps Forces Reserves, he also worked as a firefighter and a Navajo Nation Reservation Police Officer. While there were aspects of these jobs that he enjoyed, he found that the work often lacked the human element he was most drawn to: “My time in the Marine Corps, firefighting, and policework – these are all careers that are very fast paced. They require your complete dedication, and there are few chances to focus on empathy and sympathy for others.”

Filbert moved on to study business in college and achieved his MBA from the University of Phoenix. For a while, he tried deskwork but quickly discovered that it wasn’t for him. “I felt that I was hiding behind the paperwork,” he explains.

Finally, Filbert settled on a career in Death Care services. In the funeral industry, he worked as both an embalmer and Director. “My specialization was reconstruction,” he relates. “However, what I enjoyed most was working with the families and helping them through tough times.” Unfortunately, when Filbert relocated back to the Phoenix area for personal reasons, he discovered it was incredibly difficult to find work. “Many funeral homes are family-run businesses and that means they can be very tight-knit.”

At this time, Aftermath came up in his job search, and he thought he would give biohazard cleanup a chance. “I figured I was a good fit because I pride myself on my attention to detail as well as my compassionate nature. It sounded like a job that required both.”

A Career in Cleanup

Filbert officially joined Aftermath as a technician at the Phoenix office in October of 2016.  “I realized right away that I could use my OCD qualities in a positive way. When I worked on the Phoenix team, we were competitive and driven by a need to finish completely. Timeliness and being thorough in our work were equally important to all of us.”

His best work experiences were born out of the camaraderie he found, being a part of a team. “I loved working with Nicole (the Phoenix-area Supervisor) and the Phoenix “A-Team.” Nicole is very assertive, and she went out of her way to bring comfort to the team, even when work was difficult. She promoted a positive atmosphere, gave the team energy, and brought a concept of family to the company. When we felt our gas tanks running low, Nicole always found a way to help fill them up so we could get the job done.”

At the Phoenix office, Filbert was eventually promoted to Back Up Supervisor. Though he loved his team, when the Lead Supervisor position in Albuquerque finally opened up, Flibert leaped at the chance to apply. Along with new technician Orlando, he now supports other local teams in the Southwest, and provides quality cleanup services to the areas surrounding Albuquerque.

An area Rich in Culture and diversity

Filbert says it’s the diversity of cultures and ethnicities that make the New Mexico region so unique. “It’s a new market for Aftermath. There are lots of small businesses here, “mom and pop” cleaning services, that perform cleanup. They have loyal customers, but few of them have our understanding of the biohazard business.”

Similar to other areas, income, homeownership, and insurance impact how families choose cleanup services. However, culture and connections also play a role in Native American and Hispanic communities around New Mexico. “Some Native American families may have clan-based lineages that dictate who is in charge of handling death cleanup,” Filbert describes. “They may have a built-in support system for when death occurs, but as people become more educated about the risks of biohazards, traditional methods of cleanup don’t always suffice.”

Working with law enforcement in New Mexico can also be complex. Says Filbert: “In the cities, it’s the same as anywhere. But depending on the nature of the death, if an incident happens on tribal lands, families may have to work with additional law enforcement before their home is able to be serviced.”

Reserves Come from the Heart

Despite the challenges, when asked what he finds most rewarding about his work, Filbert talks about the families:  “When you see these families and make eye contact with the individuals who are suffering, you know you’ve got to do everything possible to help them. Even if you have to do an extra service or just go the extra mile to give them peace of mind. The closure you provide them by reassuring them that it’s safe…that’s what makes all the long hours worth it.”

Filbert’s family still lives on the reservation, just 2hrs away from Albuquerque. He has three children, Russell (10), Ryan (8), and Jordan. When he can, Filbert donates his time to the Salvation Army, helping out in their thrift shops and working with other volunteers in various capacities. For Filbert, giving back is important to him, both at work and at home. “Life is about doing the right thing and about doing everything that you can for others. When the gas tanks runs low, the reserves come from the heart.”

A New Career Awaits You

Think you have what it takes to be part of a great team of biohazard technicians? Aftermath is always looking for team members like Filbert. If you live in Arizona, view our most recent job listing here. For all open positions, please visit us at aftermath.atsondemand.com