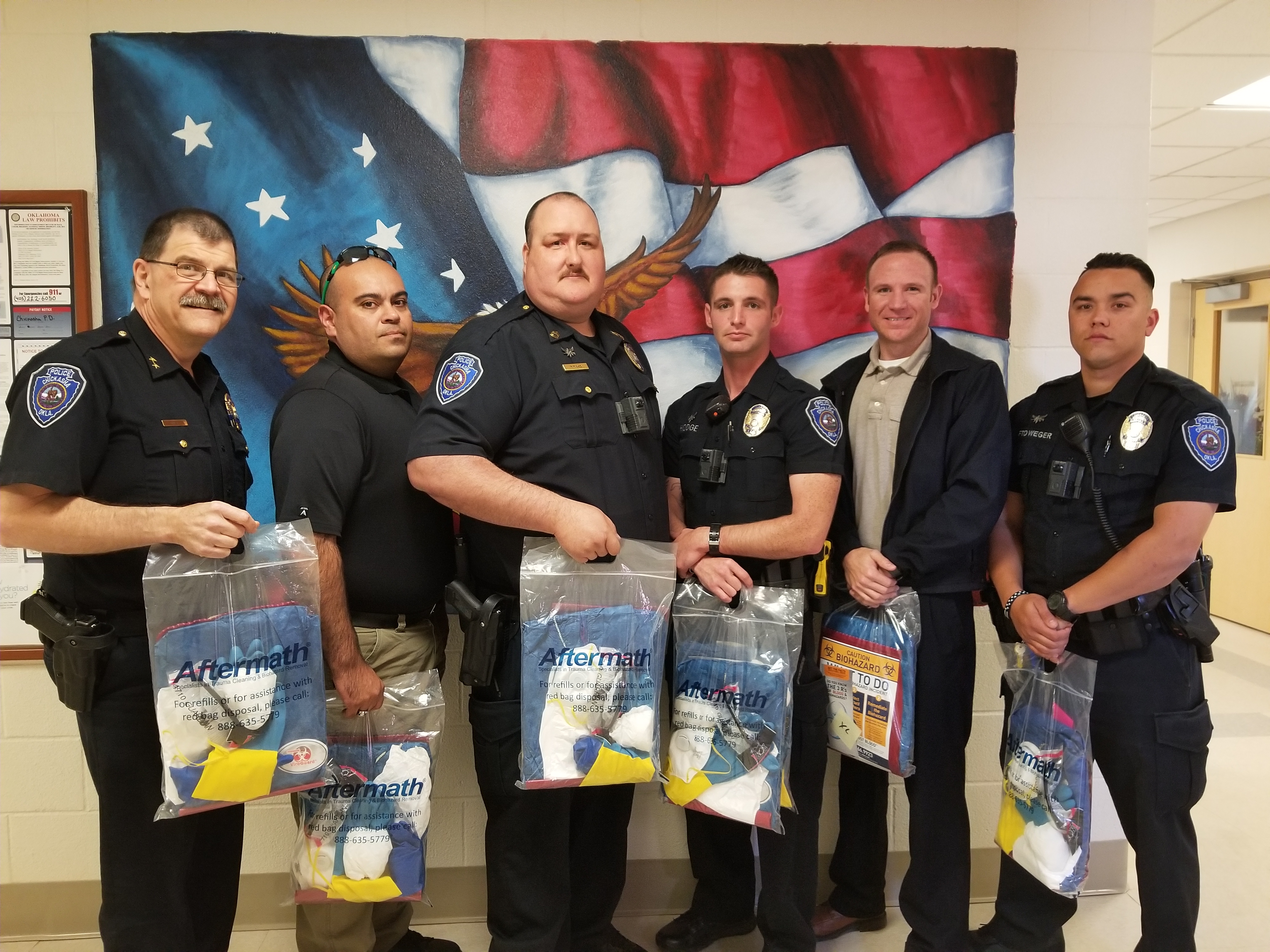 The Chickasha Police Department of Oklahoma is a small agency that is greatly understaffed for a community of 16,000 – 18,000 people. Explains Assistant Chief Music: “We currently have 32 sworn officers, 12 of which are Patrolmen. Chickasha is a bedroom community with three major highways running through it, so we have every type of crime you would see in larger cities, but fewer staff members to manage the situation.”

This spring, Chickasha was one of 5 departments to receive a grand prize in Aftermath’s Annual PPE Giveaway. The award outfitted the department with much-needed PPE, including gloves, suit, and booties, to keep the officers safe from biohazards while on the job. Earlier this month, Aftermath presented Chickashaw with their winnings and spoke to the department’s Assistant Chief, Goebel Music. Read on to learn more about the practical importance of PPE and how this award is helping Chickasha officers do their job safely.

The Challenges of Biohazards

Assistant Chief Music says that biohazards were not something most officers were educated on until recent years. “Early in my career I didn’t think about bio exposure, I just went in and did the job. Later, biohazards came to light as a serious issue. I’ve personally dealt with several situations where blood exposure was unavoidable. PPE helps provides us with the safety and protection we need while we do our job.”

One of the other benefits of PPE comes from the mental peace of mind it gives each officer, knowing they have access to the equipment needed to do their job safely and to the best of their ability.  “Officers feel better responding to crime scenes when they are prepared and properly trained on how to use the equipment to protect themselves, and ultimately protect each other and their families, by not spreading any potential bacteria or other biohazardous materials,” said Music. “With proper equipment, they know they are protected, which affords them the ability to focus on the real work that needs to be done – investigation and prosecution. It’s like going on duty with a bullet-proof vest. I have the confidence and knowledge to understand that it works, but at the same time I don’t want to put it to the test either.”

Music states PPE is especially critical for patrol officers. “These officers are often the very first people responding to a crime scene so they have the highest chance of exposure since they don’t know what they are going into. Supervisors and Detectives come on the scene after Patrolman have already informed them about what is going on.”

For Chickasha PD, entering Aftermath’s Annual PPE Giveaway this spring was a logical choice: “If we have an opportunity to provide one more piece of equipment to protect our officers, why wouldn’t we provide it? The issue is that we don’t have the funding to provide it ourselves. I saw the PPE Grant as an opportunity to acquire quality equipment, and also a chance to encourage PPE training for the officers.”

Chickasha PD had some PPE available before winning the giveaway, but it was subpar: “We have always been provided some PPE such as surgical masks and booties or gloves, but they are extremely old and probably wouldn’t provide much of a barrier against bio anymore,” Music said.

“The kit gives me the ability to pull out whatever I need at the moment. If I need a pair of gloves, they’re there. Or I may just need googles or booties. Also, the PPE kit doesn’t just have to be used at a bio scene which is contradictory to what most people think. Aftermath provided equipment that can be used for so many hazardous situations.”

Recent budget cuts in Chickasha have made funding additional equipment challenging. The department had a 3% cut early this year and expects another 3% cut in a few months.  Financially, the department must be cautious with spending, meaning that only critical gear is replaced with urgency.  “Obviously, PPE is a priority,” Music stated. “But so are other items as well.  As it stands, I have no money in the budget to replenish our current supply of PPE. The PPE kits from Aftermath fulfill a critical need in our department.”

So how is Chickashaw managing the new supplies? The answer is very carefully: “The PPE kit is considered part of their equipment just like their vest,” the Assistant Chief explained. “They are responsible for taking it with them home every night and bringing it back with them to every shift.” Music created a roster for the PPE kits to be distributed to officers within the department. Patrolmen received their first kit, then detectives, then administration. Each officer signed the roster to note that they had received it.

Music reported that there will also be mandatory training so that the officers are prepared to use the kits properly, should a need for them arise. “Our Fire Chief is our Arson investigator and his Training Captain will also put on an additional training class for us about the proper use of the PPE.  Once those two things have been accomplished, the PPE kits are individually assigned to each officer and they are mandated to have one available at all times in the event it is needed.”

Aftermath has been a long-time supporter of law enforcement officers like Chickasha PD. We are proud to recognize your services to the community by sponsoring a variety of events nationwide, including golf outings, charity runs, and special banquets. We also host contests like the PPE Giveaway and grants like our Annual K9 Grant. We also contribute to national and regional trade associations and offer access to complementary programs, resources, and special rates on jail cell and squad car cleanings.

To learn more about our special services for agencies, please visit our page for law enforcement.