Meet the Winners of the 2016 Aftermath K9 Grant 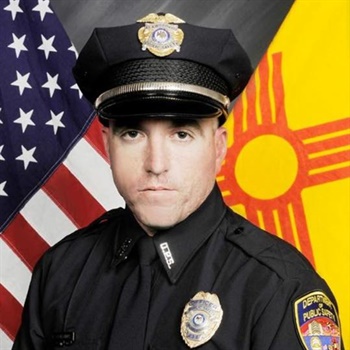 On November 4th, Aftermath officially announced the recipient of the 2016 Aftermath K9 Grant. This year, $5000 will be donated to the Alamogordo Police Department of Alamogordo, New Mexico. The department received the most votes during the 5th annual month-long competition. Alamogordo Police Chief, Daron Syling, stated in an interview this week that the funds from Aftermath would be used to help build the city’s first K9 unit. Read on to learn more:

Alamogordo is a small community of 34,000 people, located in the southern part of New Mexico. Most notably, the city is home to Holloman Air Force Base. Winning the K9 grant is almost bittersweet to Alamogordo PD, as the idea for a K9 unit was first introduced by Officer Clint Corvinus, a four-year veteran of the department. During the interview, Chief Syling described the events that surrounded the initial idea:

“Officer Corvinus came into my office and said he was trying to get funding for a K9 department; it was something that was very important to him. A K-9 unit would be a huge attribute to our agency because it makes us more proficient in our jobs. It will speed things up and make things more reliable and makes our officers feel a lot safer. It’s just a wonderful program; K9s are very good community ambassadors. We set up meetings with the heads of local businesses to get things moving.”

Tragically, less than two weeks after that meeting, Officer Corvinus was killed in the line of duty. Following his death, members of the community stepped up and assumed the officer’s cause, raising funds to help kickstart the program. After receiving the Aftermath grant this month, the department is now just $1000 shy of reaching their goal. “Now we are doing all we can to make his dream happen,” Chief Syling reports.

Thought Alamogordo emerged as the “Top Dog,” it took a lot of coming together to secure their spot in the winner’s circle. In addition to the small size of the city, the department had a late start in the contest – Chief Syling’s wife learned about the competition through Facebook over 10 days after it began. A few days later, on Oct. 12th ,the community picked up the pace. The department directly appealed to community leaders with social media presence and local influence; their reach allowed Alamogordo to get the coverage their story needed. Local papers reached out to them and the story spread further– even neighboring El Paso and Albuquerque news stations covered it.

There was also significant competition from other departments. This year, over 152,000 votes were received during the month-long voting period – almost triple the number of votes from the previous year. In the last week of the contest, the top 5 contenders ran neck and neck. This year, the runners up included police departments in New York, Pennsylvania, and Illinois. Each of the top 5 departments was given a grant as well, as a thank you for their considerable efforts.

The Value of a Unit

For a town the size of Alamogordo, the costs of building a K9 unit are nearly insurmountable. But the publicity the department received over the past month has placed them on the fast track to finally reaching their goal. “Starting a K9 unit is very expensive,” Chief Syling stated. “For a bare bones unit, the cost is $25,000 for two K9s. We are hoping to raise $30,000. We’re doing all we can to raise the funds – this contest has certainly brought a lot of much-needed attention to our cause.”

Now that the unit is nearly funded, the department will begin looking into kennels as well as training facilities for the dogs. As for the animals, Chief Syling stated that they will likely choose German Shepherds or Belgian Malanois, because of their genetics and reliable working behaviors. “Our goal is to purchase two multi-purpose K9s (narcotics, patrol, apprehension). We would assign them to assist officers and make our communities safer.”

Throughout the interview, Chief Syling spoke of his gratitude and that of the department: “We just want to say thank you to Aftermath and to the community. We really went nationwide. People were voting from all over the country. From Florida to California, we felt a lot of love from coast to coast. This is something that we can all be proud of.”

Nationwide, a Part of the Community

Representatives of Aftermath will meet with Alamogordo PD later this month to officially present the grant check. Other departments will receive their awards during November as well – so be sure to keep an eye on our blog for more great interviews and photos with the rest of this year’s winning pack.

Aftermath’s annual K9 Grant is just one aspect of the Aftermath Cares program, aimed at acknowledging first responders for their ongoing efforts to protect and improve their communities. For more information on trauma cleaning services, or to learn more about the relationship between Aftermath and law enforcement, call 877-872-4339 or visit www.dev-aftermath.pantheonsite.io.