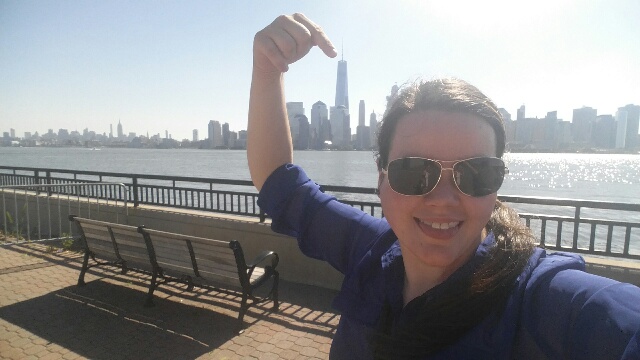 The Women of Aftermath is a periodic feature of the Aftermath blog. We hope you enjoy getting to know a few of our hardworking and dedicated employees. To read last week’s feature on Dulce Casas, click here.

Situated in Northampton, PA, the Aftermath Pennsylvania office is a hub of activity. Several crews work out of this busy depot. Each team is led by a supervisor and staffed by several skilled technicians. But Supervisor Liz Engler is more than just her job title. She is also a cancer survivor.

From Survivor to Supervisor

High school cemented Liz Engler’s goal: to work in a field where she could assist others. Her parents both worked in public service fields, her mother as a magistrate (local judge) in Allentown, and her father as reserve police officer. At the time though, Liz needed help herself. Much of her teen years were spent battling cancer. Determined to move forward with her life, Liz studied criminal justice.  She went to college, but found that it was difficult to balance work, classes, and her continued recovery.  Instead, she left school and took on a career as a caregiver.

But the job’s location in Philadelphia meant that commuting was an issue. After two years in her role, she began searching for a new career. While searching online, she learned about Aftermath.

Liz accepted the position of technician, but quickly moved into the role of a backup supervisor. She was promoted again to Supervisor early this year. This January will mark Liz’s third year with Aftermath. In all that time, her enthusiasm for her work has never waned: “The fact that I can help people in a different way is what keeps me going every day. I had to deal with a similar situation when I was younger; I didn’t want my family to deal with the cleanup, so I did it. There is a need for us and what we do. No one should have to face this kind of thing alone.”

Ready for the Challenges

Liz’s current crew consists of two members: Backup Supervisor Michael Chappell, and new hire Kamarr Thompson. Liz has also shared her passion for the business with others; she recruited one of her fellow co-worker Stephanie, who found her own success working with the company. She is still on the look out to add one more to the team. “The perfect candidate would be someone who can keep up with the demands of the work, and who is okay with our crazy schedule.”

Liz knows it isn’t always easy to do what she does. When she began with the company, there were those who had their doubts about her ability to do more strenuous tasks. “I never focused on what I couldn’t do,” Liz relates. “All crews work as a team, and I was able to step up and do what was needed. I never doubted myself, and I succeeded in ways that they did not imagine when they hired me.”

Liz reflects that while her own challenges related to her health, other employees usually find being on call the hardest part of the job. Liz considers herself lucky in that department: her fiancée Aaron and their beloved dog, Zephyr, are very understanding about the nature of her work. She also has a good grasp of work-life balance, and stays involved with her local neighborhood. Among other activities, her family are regular participants in the local National Night Out event for their area. This year, with her parents on vacation, Liz wanted to contribute in a similar way: by picking up the tab on some of the food. When she mentioned this to another supervisor, they suggested she talk to corporate about sponsorship. Aftermath purchased pizzas for the event, and Liz donated extra pies to the local fire department as a thank you.

Liz’s compassion is something evident, both on and off the job. On a recent assignment, a client was coping with the unexpected death of a relative. The customer confided to Liz about her brother’s condition before he passed away, and how his grief over the loss of his wife had left the house in a state of disrepair. She’d already faced one difficult cleanup before; she did not think she could handle the process again. Understanding the woman’s predicament, Liz and her crew stepped up and assisted the customer wherever they could. “She couldn’t do a lot. It was such a big, beautiful home. Seeing it put back in a livable condition was rewarding for all of us. She was very grateful.”

When asked why she enjoys her work, Liz was quick to reply: “Our customers show their appreciation and being able to help out families in need is very important to me. Nothing is better than seeing someone happy because we lifted a heavy burden off their shoulders. Sometimes people can get overwhelmed. Their nerves are shaken. I never know what I will be facing when I deal with a client, but when the job is done, I know their lives will be improved, thanks to our hard work.”

Aftermath is always accepting employment inquiries. Learn more about a career at Aftermath or visit us on LinkedIn.