Aftermath Services 2017, a Year In Review

2017 was a big year for Aftermath Services. Through our blogs and social media, we’ve shared stories, photos, and recaps of the highlights with you. From conferences to contests, we’ve documented our year day-by-day, and now we revisit some of our best moments and biggest events. Moreover, we’re looking forward to making 2018 even greater. 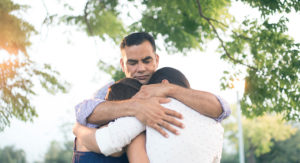 Perhaps our most important accomplishment In 2017, Aftermath helped over 2,700 families and businesses recover from tragic and difficult situations. Our new offices reached areas of limited coverage, and our outreach to law enforcement at conferences and through in-office visits allowed us to spread the word of the importance of professional biohazard cleaning to more families nationwide. 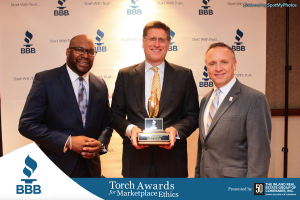 In one of our proudest moments this past year, we were awarded a Torch Award for Marketplace Ethics by the Better Business Bureau of Chicago and Northern Illinois. Six Chicago-area businesses were selected from hundreds of nominations, and recipients were honored at a luncheon in November. Companies receiving the Torch Award distinguish themselves as businesses that operate in an ethical manner. “Torch Award winners demonstrate the highest ethical standards of trust and behavior toward customers, business partners, shareholders, employees, and the communities in which they do business,” says Steve J. Bernas, President & CEO of the Chicago-area BBB. 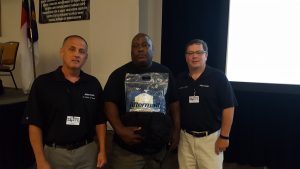 When it comes to giveaways, Aftermath sprung into action early in the year with the Spring PPE giveaway. This year’s contest drew entries from almost 1,500 officers and 980 departments across the country. 5 grand prize winners were awarded 5.11 tactical bags and Aftermath PPE kits, and over 200 additional departments were awarded PPE kits. Throughout the year, Aftermath gave away additional kits and bags at conferences and events throughout the country. That’s hundreds of officers protected by PPE. 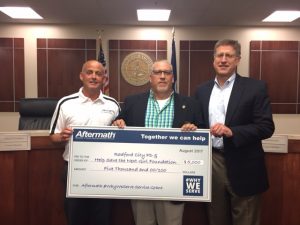 This summer, Aftermath also introduced the Why We Serve grant, which invited officers to speak about their experiences and why they choose to work in law enforcement. Officers submitted videos and the four finalists were awarded community grants, which they donated to a cause or organization of their choice. Lieutenant Andy Wilburn of Radford Police Department in Virginia was the official recipient of the grand prize, a $5,000 service grant; Andy’s grant went to the Help Save the Next Girl Foundation.

Finally, Aftermath’s most well-known event, the Aftermath K9 Grant, kicked off in October. This year, a total of 3,316 departments participated and over 330k votes were received (that’s more than double the number of votes from 2016!). Furthermore, over 300 departments had 100 or more votes each, making for some fierce competition. Because of the outstanding turnout and some very close numbers, we decided to award 3 additional winners with $500 grants. That means 8 prizes and over $15,000 were awarded to departments across the nation, including Ohio, Florida, Illinois, New Mexico, and Texas. 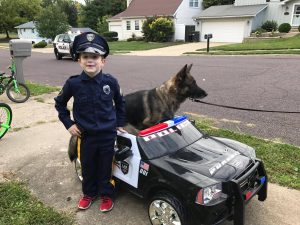 This year, Aftermath helped to sponsor the 15th Anniversary Law Enforcement Torch Run Cop on a Rooftop event for Special Olympics. On May 19, law enforcement officers throughout Illinois staked out the rooftops of 277 Dunkin’ Donuts locations from 5 a.m. to 2 p.m.  As a result, more than $670,000 was raised for the athletes of Special Olympics Illinois.

Aftermath also enabled several police departments to continue their tradition of helping low-income kids make holidays a bit brighter for their entire families with the annual “Shop With A Cop” program. Under the program, school districts nominate students whose families could use financial help during the holiday season. Police departments then purchase gift cards for area stores, allowing students to shop for gifts with the help of an officer. Funds for the Shop with a Cop event come from charitable sources, including donations from community members and area businesses like Aftermath.

Aftermath also contributed to Officers Down 5K. OD5K is a nationwide law enforcement event which celebrates officers who put their lives on the line daily and those who have fallen in the line of duty.  OD5K partners with departments and other law enforcement organizations to create safety-focused community events, including fun runs and races.

In May, Aftermath offices across the country donned red noses and tuned in to watch comedians and other entertainers as part of the Red Nose Day USA event. Red Nose Day brings people together to make a difference while raising money and awareness for kids in need at home and around the world. In the past three years, the Red Nost Day Charity has raised over 100 million dollars, reaching over 8 million children living in poverty. 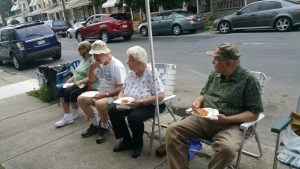 Later in the summer, Aftermath employees gathered with their neighbors to celebrate National Night Out. NNO is an annual community-building campaign that promotes police-community partnerships and neighborhood camaraderie. Furthermore, NNO provides a great opportunity to bring police and neighbors together under positive circumstances. Aftermath technicians joined with their neighbors and local law enforcement on the first Tuesday in August (Texas celebrated on the first Tuesday in October), hosting block parties, festivals, parades, cookouts and other community events. 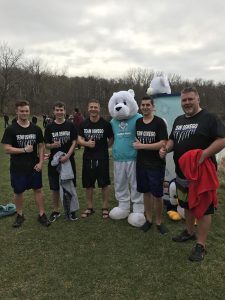 Of course, there were plenty of other activities and benefits not featured here, including golf tournaments, conferences, and special donations. We’re excited to share another year with you; most of all, we look forward to helping our communities and neighborhood prosper and finding new ways to show our appreciation for members of law enforcement.